Collins Construction is working with W.RE to deliver a modern and high-quality office scheme on the historical site of 75 Grosvenor Street, Mayfair. The 37,500 ft2 project has been five years in the making, with planning permission for the new design granted in 2017 and works underway in January 2019. The project team has been on-site for just over two years and aim to complete in Summer 2021.

Mayfair is renowned for its elegant period office conversions, prestigious homes, and upmarket shops, bars and restaurants. W.RE’s key objectives for the development are to sensitively restore the buildings’ rich history by preserving the original features, while effortlessly introducing a modern extension to create a continuous, best in class, modern, grade A office building set across three carefully restored historic townhouses.

Over the coming weeks, Collins Construction will describe how the team is working through a complex structural refurbishment programme to transform these listed buildings and connect them seamlessly to provide one 37,500 ft2 office building.

The Grade II listed front houses at – what is known today as - 73 and 74 Grosvenor Street were built in the early 1700’s as identical townhouses, and 75 was built as a narrower, single house. The houses provided London accommodation for provincial nobility during the court season and parliamentary sessions.

No. 75 was home to Baroness Spencer-Churchill, Winston Churchill’s wife, who was born on the premises on April 01, 1885. Alister Maynard MBE, a talented 20th Century artist who designed interiors for Kensington Palace, The Dorchester and The Connaught was a resident of No.73.

In 1851, French silk merchants, milliners and makers of ladies’ apparel, the Devy family initiated 74 Grosvenor Street’s first round of redevelopment. The building was substantially reconstructed, extended, refaced and turned into a commercial premise.

Since that date, the building has undergone three separate refurbishments. The Grosvenor Estate reverted No. 74 to residential use in 1872 and then into use as practices of important physicians, as well as being home to Thomas Lovell Buzzard during the early 1900’s, a pioneering neurologist who founded the Epilepsy Society.

In 1948, No. 74 became an office and showroom and in 1996 it was turned once again into the offices that Collins and W.RE are working on today.

It is within No. 74 that the majority of the preservation work is taking place. The building contains listed brick walls, original listed staircases and chimneys, and two original listed fireplace surrounds. These are being restored on and off-site so they can be repurposed as features of the new office space. Many of the building features require specialist conservation work in an appropriate secure and controlled environment off-site.

Collins opened up the building in March 2019 and found the heritage walls to be in incredibly poor condition. This influenced the sequence and type of construction to create additional time for their restoration. Preserving these significant period structures required the careful demolition and rebuilding of the walls to ensure they were not damaged within the construction process. Additional lintols and a significant amount of temporary works have been introduced as protective measures and a temporary roof has been installed over the heritage houses while the office extensions are constructed. 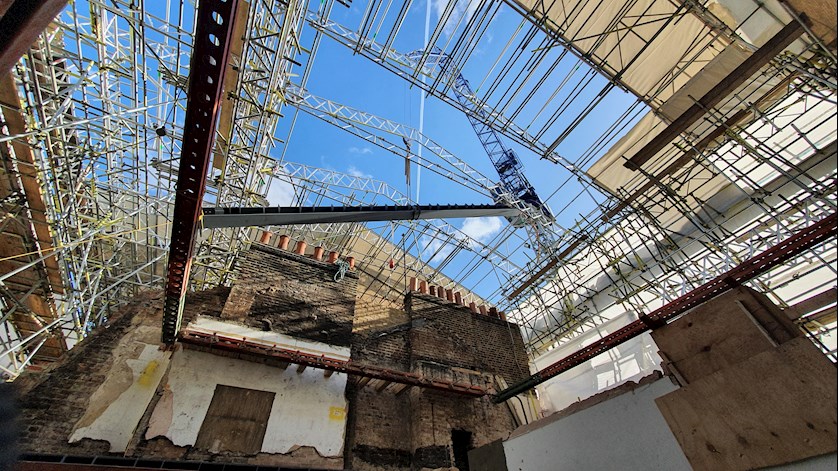 Alongside the preservation of the heritage areas, the existing office space at the rear third, fourth and fifth floors is undergoing an extension as well as a single storey fourth floor extension to the front of 74 Grosvenor Street.

The façade and balconies are being replaced and have been designed so they remain in context with the buildings’ original character, while modern terraces and green roofs will be installed to offer occupants amazing views over Mayfair. 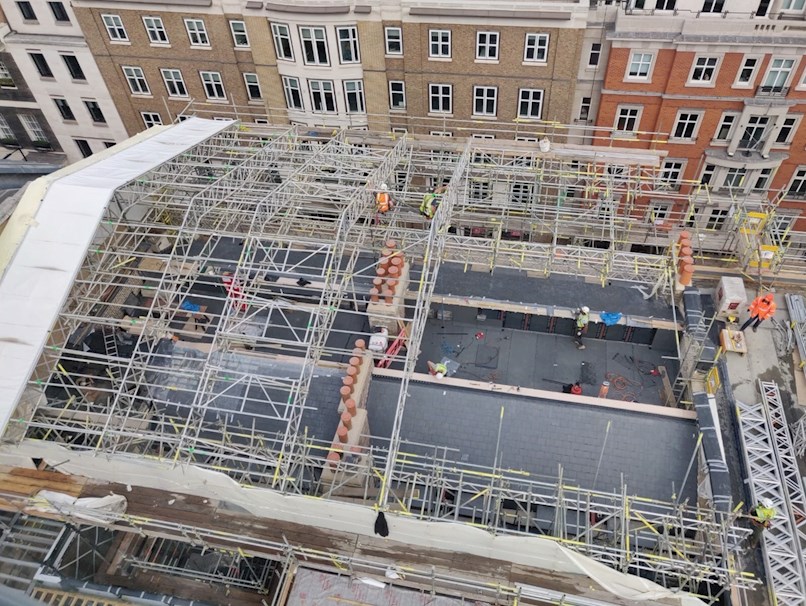 One of the standout features within 75 Grosvenor Street is the helical stair that spans five floors, designed by renowned staircase designers, EE Stairs. The solid steel helical staircase has been imported from Holland and will be completed in May 2021.

The significance of the staircase is that it represents the standard of quality and design of the internal fit out, which includes high-end material finishes that combine modern and classic character. The team are laying luxurious crema perla and carrara stone as well as alpine white and statuarietto marble throughout the project in all landlord areas. The reveal of the refurbished façade has begun signifying the completion of the four-storey high atrium roof.

Over the next few weeks, we will share project updates as we progress and the project approaches completion.